This simple but invaluable plugin lets you know the damage you just caused to a mob (including other players), and how much health it has left. 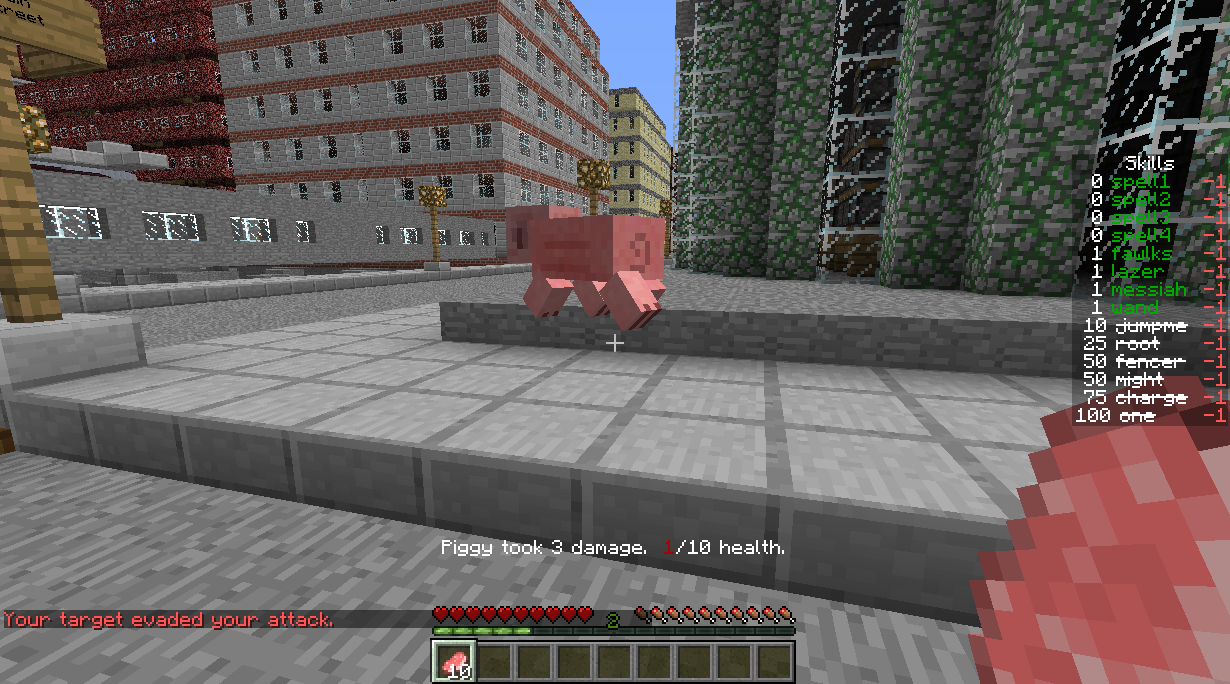 If you have 1.8 bukkit/spigot then you can now enable actionbars by adding useActionBar: true to your config (or set to false to disable).

Mob Health has a range of useful options including:

Updater Information
Note that unless you edit MobHealth configuration it will automatically update as new versions are approved by the Bukkit team.

You can edit config.yml in the /plugins/MobHealth/ folder you can find the following settings.

You can trigger damage notifications, if your plugin adds skills or spells for example. And far more usefully - you can query MobHealth to get the current health and max health of any Mob, regardless of which plugin is responsible for tracking it.

Think of it as Vault for mob health levels ;) You code for one plugin - I sort out the mess behind the scenes.

As frequently requested, MobHealth can now display health bars above Mobs, and a health counter for players.

PLEASE NOTE: If enabled - these bars show above ALL players / mobs, regardless of any toggle or permissions settings.

Enable this feature with the following flags in config:

Changes health counter from HP to a percentage of health left (recommended).

Enable health bars for all mobs.

You shouted for it - here it is, Epic Boss support.
Thanks to ThaH3lper for adding in an entire API for MobHealth.

If Spout-plugin is installed and the client uses SpoutCraft (and disableSpout is on its default false setting) then notification will be shown with the achievement notification (as seen above).

MobHealth now supports the Client Mod simple notice. Lets you show the messages elsewhere so your chat is spam free.
Thanks to FeildMaster for the pull request :)

Heroes health and levelled up HP's are reported correctly as are mobs whose health levels have been adjusted in the config. Use of a Heroes skill will trigger a notification when it damages.

Mobs adjustments to health are now tracked and reported in MobHealth.
Thanks to coldandtired for adding in MaxHealth and an API for me :)

Bosses in a currently running Mob Arena report correct health and max-health. As do waves with a modified reduced health.
Thanks to garbagemule for adding MaxHealth to mob area for me.

MobHealth detects wandering bosses and correctly reports their health and name.
Thanks to bm01 and Erackron for integration help.

If Monster Apocalypse is set to handle mob's health then these values are used for MobHealth.
Thanks to blainicus for answering my queries.

Thanks to WoopaGaming for the video.

Toggle notifications. [player] is ignored via chat and mandatory via the console.

Like many bukkit plugins, Mobhealth utilises Hidendra's plugin metrics system, which means that the following information is collected and sent to mcstats.org:

8.2.1: Rollback gettextresource to get resources

Github no longer allows a "downloads" section, so I no longer mirror files there. If you'd like to test beta/dev versions follow me on twitter and ask there! But understand such files would not yet be approved by BukkitDev staff.

Donations of any amount are, of course appreciated :)

Contributions go towards maintaining my development server to encourage continued development, MobHealth is solo coded by me, and supporting so many other plugin takes a fair bit of time. So if you think that time is worth something then Hit the dontae button in the top right of this page :)