- Attach unlimited text to signs or living entities (including armor stands, villagers, mobs and Citizens2 NPCs!).
- Give text out as a book when players look at the sign/entity.
- Run commands when the player: 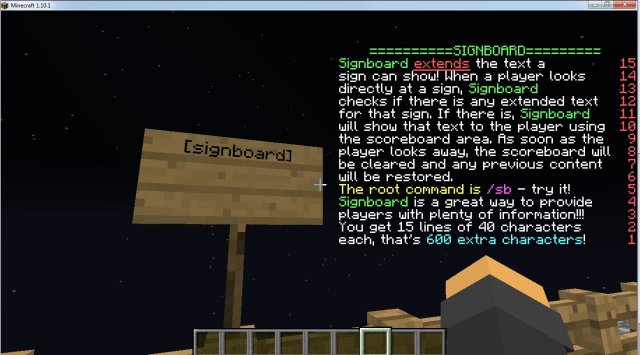 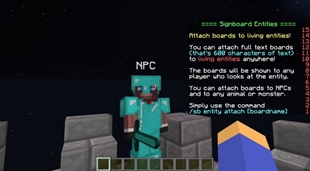 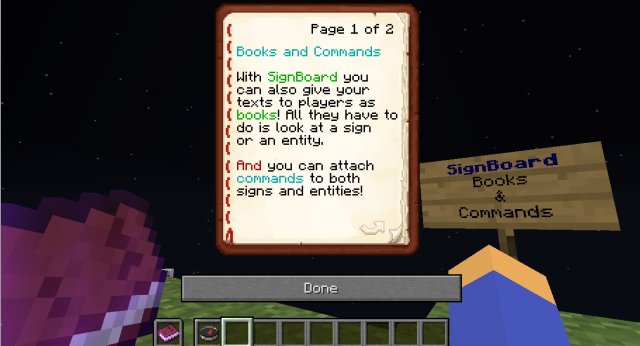 Tired of the cramped space on your signs? Now you can have an unlimited amount of text shown with your signs! You can even attach that text to living entities! AND you can attach commands to signs and entities to run at different times!

With SignBoard, you create "boards" of text and attach these boards to signs or living entities. Each board can hold up to 15 lines (a total of 600 characters per board). You can also group several boards into a "set" and use the set as a single body of text.

When players look at a sign or entity, the scoreboard area is used to show them the text on the boards. It's great for communicating... er, well, anything, really, in a game. Admins can provide players with instructions, players can show visitors detailed info about their builds, RPG games can provide detailed lore when a party enters a room... There's no limit.

When players are shown a set of boards, only one board is shown at a time. Players can cycle back and forth between the boards by right- or left-clicking the sign/entity. That way, a set works like pages in a book.

You can also attach commands to both signs and entities, and control when these commands will run. Commands can be run when the player looks at a sign/entity, looks away from a sign/entity, clicks a sign, attacks or kills an entity.

As an added perk, SignBoard also lets you edit sign lines without having to break the sign and write everything from scratch - just look at a sign you've created and use the command /sb sign lineX [text] (see below).

(In Spanish, courtesy of Ajneb97.)

(Signboard has its own set variables and supports Placeholder API)

As of version 1.6.6, SignBoard supports different languages for its interface (menus and messages). This allows users to choose their own language preference and use the plugin in that language. Right now it has options for English (US), Portuguese (BR), and Spanish (CO), but you can translate the locale file into other languages – just make sure to share them with us, and we'll include them in future releases of SignBoard!

Check out the /sb locale commands.

The default text for new boards has also been moved into the locale files. So now when a new board is created, each player will see its default text in their (chosen) preferred language.

SignBoard works by letting you create "boards" and then attach those "boards" to one or more signs or to living creatures - animals, villagers, monsters, armor stands, NPCs and even real live players (only OPs can attach boards to players).

You can group boards into sets by using the /sb set command. A set then behaves like a single body of text, and the various boards it contains will be shown in sequence as the player right or left-clicks.

Attach and detach a board or set from a living entity with the commands /sb entity attach and /sb entity detach.

The content of the board is shown in the scorecard area, so each board can have up to 15 lines of 40 characters each.

Showing multiple boards with board sets

Starting on version 1.3.2, SignBoard lets you show multiple boards to your players whenever they look at a sign or living entity. This is accomplished by grouping a number of boards into a set.
Use the /sb set commands to create, delete and list existing sets. Attach and detach sets from signs and entities the same way you attach/detach boards: with the /sb sign and /sb entity attach and detach commands.
Once a set is attached, the first board on the set will be shown when the player looks at the sign/entity. Then the player can cycle through the different boards by left- and right-clicking. Sets can contain as many boards as you want.

A couple of notes about entities with sets attached to them:

Use the /sb sign status and /sb entity status to check the status of all options defined.

As of version 1.6.12, the command /sb board give_as_book [boardname] [playername] can be used to immediately give a certain board's content to a player as a book. This command can be used, for example, in a sign's or entity's "run" commands to give out the corresponding book only when the sign or entity is clicked on, instead of when the player looks at it.

SignBoard will automatically convert your board texts to place them in books (when show_book is enabled). Since the size of the lines in a book and on the scorecard are so different, and a book has page breaks, SignBoard will attempt to break the lines and the pages neatly, but some fine-tuning may be necessary.
Here are some tips to help you with that:

Just as you attach boards to signs and entities, you can also attach commands that will be run at specific times. These can be any command that an admin can issue in-game. The commands will be run as if they were issued by the player and as if the player had admin authority.  The commands accept variable substitution just like any SignBoard command.

As of version 1.3.3, you can also insert delays in the sequence, with the syntax [Tu], where T is an integer > 0 and u is a time unit: 's', 'm' or 'h'. For example, a sequence of [5s] | | [2m] | , when executed, will wait 5 seconds before running and then 2 additional minutes before running . Use the delays with care; delayed commands will be executed even if the player is no longer looking at the sign/entity, or even gone from the server.

The following SignBoard commands control what happens and when:

Use the /sb sign status and /sb entity status to check the status of all options defined.

Use any of these variables anywhere in your boards. Make sure to include the "{" and "}".

When the board is shown to a player, the variables will be replaced with their real-time values.

Placeholder API support started with Signboard version 1.1.8. This allows you to use variables ("placeholders") from many other plugins, in addition to an extensive list of "native" Placeholder API variables.

To use Placeholder API, download the plugin, drop it into your plugins folder and restart the server. In the game, issue the command /papi ecloud list all and look for the placeholder group you want. Then click on it and accept the command to download it. Then all you have to do is use the placeholders like variables on your boards, surrounded by '%' (%placeholder%).

Placeholder API native variables and their groups are listed here.

As of version 1.4.9, SignBoard uses the FeatherBoard API for out-of-the-box compatibility. A special thanks to jamisen10 for bringing the FB API to my attention.
Up to version 1.4.8, SignBoard, implemented a command-based FeatherBoard compatibility workaround. It detected the presence of FB and then issued "/fb off -s" just before showing a board to a user (to turn FB off for that user), and then "/fb on -s" when the user moved away (to turn FB back on).
If you have another scorecard plugin that is keeping SignBoard from properly showing its boards, and that plugin has "off" and "on" commands such as those described above, you can use the "cmd_before" and "cmd_after" options in config.yml to implement the same "off/on" mechanism as for FeatherBoard. Or you can do the same for individual boards, using the board commands. A special thanks to gmalone for helping me work out this solution!

Categories allow you to communicate different content to different groups of players.

SignBoard can respond to any of these five root commands: /sb /signboard /sbd /sbrd /signbd.

The active_aliases parameter in config.yml controls which ones are actually used. For example, the following configuration line would make SignBoard accept all 5 root commands:

By default, only three options are active (sb sbd signboard), but you can mix and match as needed to ensure compatibility with other plugins in your server. The first option on the list will be the one featured on all of SignBoard's help texts (usually "/sb").

By default, SignBoard will automatically download and install new updates when you restart or reload the server.

You can control this feature by changing the updates: option in config.yml.

Valid values for updates: are:

An update check message will always be shown on the console.

After an update, OPs receive a one-time message telling them about the new version. They can check version history with the command /sb version .

No need to update your preferred settings in config.yml !!

When a new version is downloaded and installed, SignBoard will update the config.yml file preserving your custom settings automatically.

The following are the default settings in config.yml:

By default, SignBoard allows every user to use the howto, variables, sign, entity, and board commands, and also allows every OP to use the reload and version commands. Additionally, all commands attached to a sign or an entity will run when they are triggered.

To change permissions, use a permissions manager (like PermissionsEX). Even if given the signboard.admin permission, a user must be OP to use the reload and version commands.

The default permissions are as follows (signcmds and entitycmds are false by default, all of the other are true by default for all players):

Here's an example of how to explicitly GIVE these permissions in PermissionsEX; all players in the group called "playersallowed" will explicitly receive all SignBoard player permissions:

And here's an example of how to explicity DENY some permissions in PermissionsEX; all players in the group called "playersdenied" will be prevented from specifying any commands to be run when signs or entities are looked at, looked away from, clicked or killed. Notice the extra "-" that negates the permission.

This plugin utilizes a plugin metrics system, which means that the following information is collected and sent to bstats.org:

Go into /plugins/bStats/config.yml to disable stat collecting if you wish.