Quest World 2 is an extremely lightweight and easy-to-use Quest System offering
everything you could possibly need for your RPG Server, or maybe even Factions or Prison One
since it not only offers RPG related Quest Layouts but also simple Quests trading one Item for another.
On its own, Quest World 2 has no Quests at all, the Server Owner has to create its own Quests, however
there will be several Quest Packs available for download later on.

Also, this Plugin is heavily inspired by the Hardcore Questing Mode Mod by LordDusk, VSWE and NewCastleGeek, a huge thank you to them for developing their Mod.

IMPORTANT: I (mrCookieSlime/TheBusyBiscuit) have stopped working on this Plugin and now develop Video Games instead (more on my Youtube Channel). But this doesn't mean QuestWorld is dead. This Plugin is available on GitHub, so if you are or know a talented Plugin Developer, consider contributing to it by making a Pull Request to keep this Project alive. 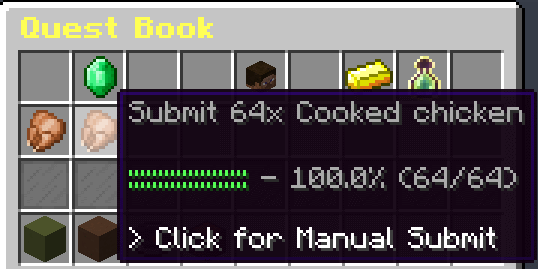 You can create your own Quest Pack and share it with people all around the World.
Simply create your Quests and Categories and then do /questeditor export <File>
e.g. /questeditor export QuestPack this will generate a .zip File (/plugins/QuestWorld/presets/QuestPack.zip)
You can feel free to send me this .zip File or post it online.
I will be providing a variety of Quest Packs in the future, however there are none available at this point
since QuestWorld 2 is not yet released.

You want to take over this Project? Start so by submitting Pull Requests on GitHub!

Check out QuestWorld's Source Code, if you want to keep this Project alive, maybe even consider contributing to it by making a Pull Request!

All my Plugins are using an Auto-Updater to make sure, you're always
using the latest and hopefully most bug free version of my Plugin.
If you don't want this Plugin to be auto-updated, you can turn it off
in the config file at "options -> auto-update: true/false"

They also use a Metrics-System which collects the following Informations: